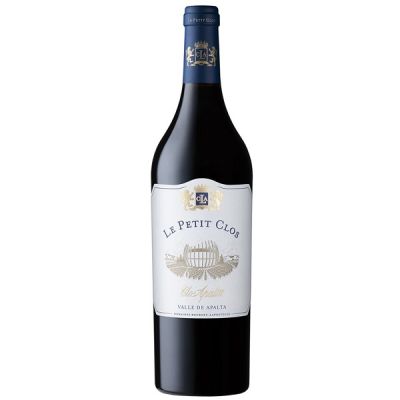 Winemaker Notes: The 2017 vintage was shaped by extreme conditions which promoted deadly, tinderbox conditions for the propagation of devastating wildfires, with a total of 600,000 hectares of forest. To our great relief, our vines were spared and suffered no smoke damage, which was soon confirmed on tasting the different parcels of grapes.

Winter was exceptionally dry at Clos Apalta, with a 35% hydric deficit compared to the long term average. Spring was drier and cold. In November, marginally higher temperatures and marginal accumulation of rain resulted in budbreak commencing 10 days early. Summer was unbearably hot, with scorching temperatures hovering between 32°C and 35°C. After the first ten days of March, both minimum and maximum temperatures had dropped markedly. Such temperature variations allowed the grapes to complete phenolic ripening, promoting intense color and retaining intense fruit character and freshness

Tasting Notes: Superb color of dark garnet red.  On the nose it shows subtle and spicy; great elegance and aromatic complexity with notes of ripe fruit (blueberry, blackcurrant, black cherry, blackberry…), opening on toasted and fine woody notes.  On the Palate it is a frank and soft attack with savory, silky and well-integrated tannins. Full, round and fleshy palate ending with a magnificent aromatic persistence full of finesse.

James Suckling - "This is so delicious with blackcurrants, spice, sweet tobacco, lavender and roses. Full-bodied, tight and very polished with gorgeous texture and finesse. Shows tannin tension at the end. A blend of mostly cabernet sauvignon, the rest cabernet franc. Better after 2022."

Robert Parker's Wine Advocate - "The second wine, in the Bordeaux sense, the 2017 Le Petit Clos has a different blend from the grand vin, in this case 68% Cabernet Sauvignon, 16% Carmenere, 9% Cabernet Franc, 5% Merlot and 2% Petit Verdot and is quite different every year. It fermented in 7,500-liter oak vats with indigenous yeasts and a four- to five-week maceration followed by malolactic in new barriques. It matured in new French barriques for six months and spent the next 16 months in first, second and third use French oak barrels. I found a lot less influence from the oak here than in the "grand vin" and a more classical profile with dominance of the Cabernet Sauvignon—ripe without excess, powerful and concentrated but with very good balance. It's quite approachable even when it feels quite youthful; the tannins are round, and the wine is neat and velvety with some creaminess. It has an elegant profile within the powerful character of the vintage. It surpassed my expectations, and I find it every bit as good as the 2016.Rating: 93+"